Who's Killing The Emos?

In high school (2004-2008), I never really fell with a certain scene and was pretty open-minded with music, but I was very keen on listening to punk, indie & oldies. I had friends that were into different types of music/scenes such as punk, indie, psychobilly, metal, rap, etc. I associated with many people and most of us got along with one another, but there was a certain type of music/scene in that time that I (along with many) strongly loathed & had zero affiliation with. It was horrible, dumb & ridiculous. This was a scene that had their own music which tried to be deep & catchy, but failed to really make an impact in the long run. This was “Emo”. Emo was a short-lived fad that many kids from well-off families had flocked to because they felt punk & metal & whatever else was either old fashioned & lame. They wanted to be “different” from anything else out there and they also saw this as an opportunity to be “deep” with their feelings when the reality was they just wanted to whine & cry so mommy & daddy would give them money for cheap Hot Topic clothing and emo CD’s from FYE.

In early 2008, Mexican TV personality Kristoff Raczyński gave a rant on “Telehit” about how Emo isn’t a movement and that it's just a lame bullshit fad. After that aired, emos from several major cities in Mexico began to be harassed by the punks, metalheads & darketos in local hangouts. Word got around online saying to fuck up all the emos to rid of them and their bullshit “movement”. These attacks on the emos happened week after week leading to a big protest in Mexico City’s Glorieta De Los Insurgentes where about 300-800 emos gathered and this lead to an altercation with bottles being thrown & studded belts being used for fights with punks, metalheads & darks that came to the protest to talk shit. It sounds like something out of La Banda De Los Panchitos, but it was far from that. It was a gathering of a bunch of kids with nothing better to do. And I’m not just talking about the emos either.

Later that year, Miguel Marte made a movie somewhat inspired by what happened to the emos in Mexico. That movie was called Emos Vs. Darketos.

An emo kid has been found bludgeoned to death. He’s one of many that have been killed the same way and detective Rafael (Alfonso Zayas Jr) along with his partner Pablo (Raul Gonzalez) are trying hard to find the psycho responsible for these brutal deaths. Rafael suspects it’s the darketo kids behind this since they’ve been known to threaten & harass the emo kids around town. With Rafael buried in work & hardly home; his son Rodrigo (Carlos Pedreira) has become an emo kid and the reason why he’s an emo is because he is traumatized by the murder of his mother & this has caused him to become very emotional. He feels life is unfair & cruel and doesn’t care to die. Rodrigo’s best friend is a dark girl named Nena (Brenda Castro) who’s darketo boyfriend “El Puas” (Ramses Soto) despises emo and this of course causes a friction between them all. Nena’s father (Tito Guillen) is too a darketo who practices witchcraft and he believes his curses are causing the emo kids to die! But the reality of course is that it is just someone wearing a ski mask & dark trench coat beating these emo kids to death with a black baseball bat.

I’m not entirely sure what Miguel Marte was trying to do with this movie since the title is “Emos Vs. Darketos”, but we never see a brawl between them at all. Instead, we just get scenes of the emo Rodrigo ranting with Nena about life being miserable and looking like a complete wreck of an emo. We do however get one scene with El Puas kicking Rodrigo’s ass and saying how emo is complete bullshit. After that, the movie solely focuses on trying to find out who the killer of the emos is. It doesn’t take very long in finding out who it is and the motive behind it is pretty peculiar honestly. It would of been cool to see a bunch of emo kids fighting against the darketos, but I guess that was too much to ask for, so instead we get a murder thriller story. I also cannot forget to mention that there is a mildly amusing scene with a gun battle between a darketo drug gang and Rafael. The leading darketo guy is a much older man with white makeup on and wearing a skeleton hoodie. Augh!

Emos Vs. Darketos could of been a great movie had it been what it should of been about, but alas we got something much else instead. You’ll probably dislike it or maybe you’ll just kinda like it. Either way, do not expect what I expected. I honestly didn’t dislike the movie, but my expectations were for something else and that was not delivered at all sadly. Maybe one day we will get a movie where we see a kid with a mohawk or dark makeup beating the shit out of emos in a busy Mexican city. Maybe one day. Maybe one day.

You can watch Emos Vs. Darketos for free on Tubi, so go for it if you have time to spare. 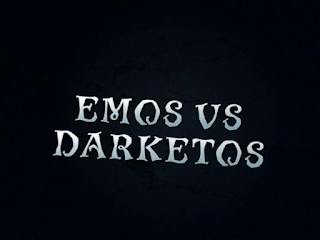 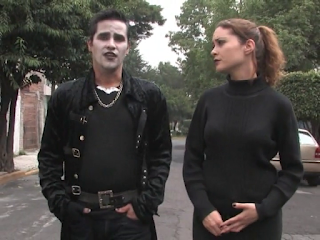 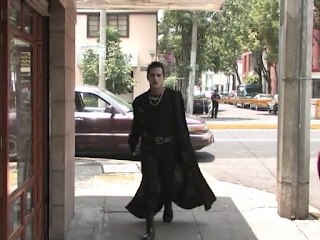 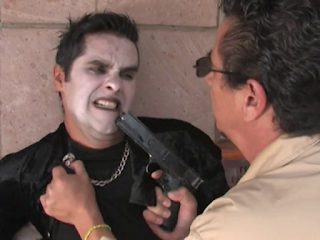 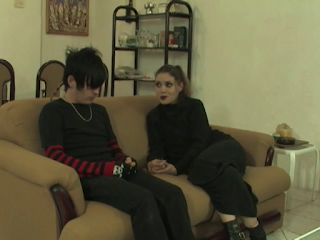 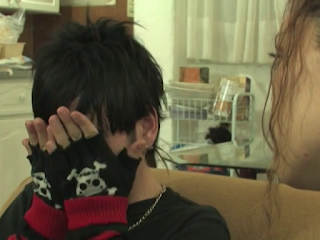 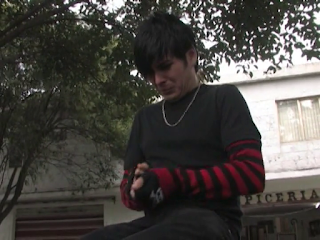 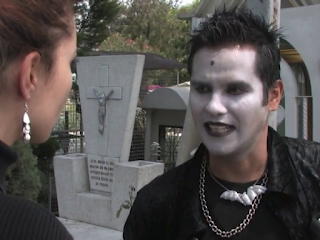 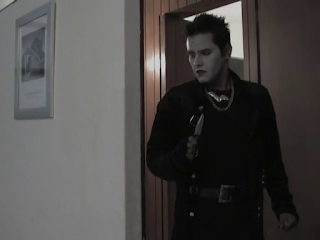 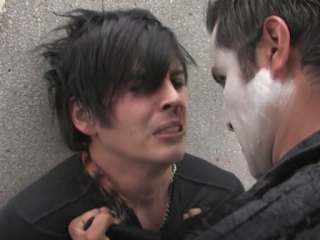 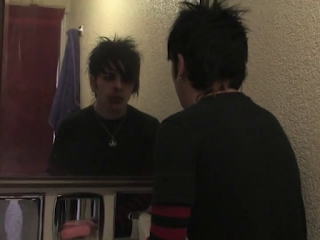 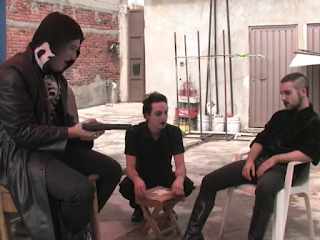 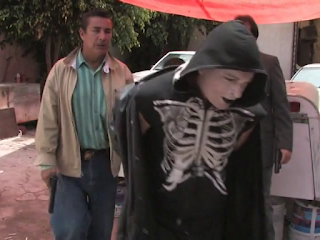 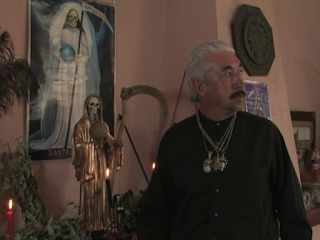 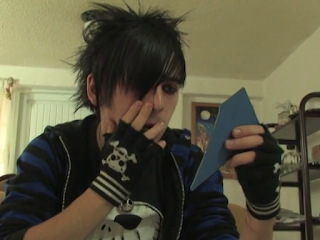 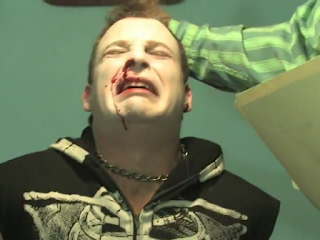 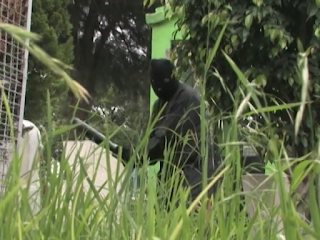 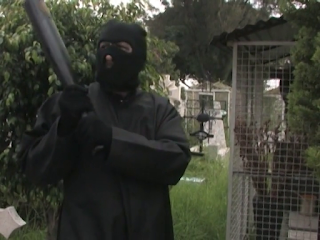 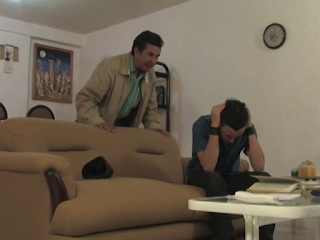 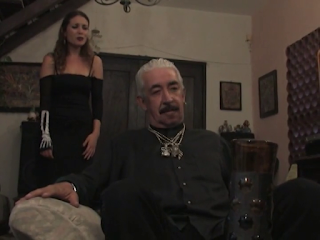 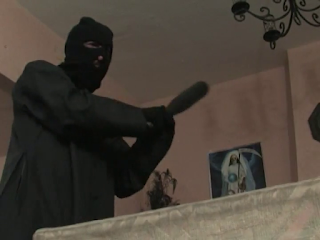 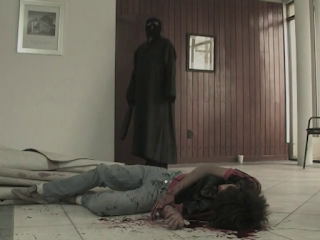