Giving Credit Where Its Due: Satanico Pandemonium new opening credits.

By now you're probably still cumming over the fact that the great nunsploitation Mexican Horror movie Satanico Pandemonium is on Blu-ray via Mondo Macabro. It took about a year longer than anticipated for its release due to print issues (minor ones, may I add). Now something that isn't told or if it even matters to be told; but it seems during production of the Blu-ray, Gilberto Martinez Solares' son Adolfo Martinez Solares really wanted to be credited in co-writing the movie. In the DVD & Blu special feature "The Devil Went Down to Mexico" (filmed in 2005), Adolfo tells the origin of the movie which was that he and his father wrote the movie for producer Jorge Barragan since he had the idea of the movie, but had no means of writing an actual script for it. Gilberto and Adolfo wrote the movie for Jorge under the condition that Gilberto would fully direct the movie which of course he did and thus Nunsploitation/Mexican Horror history was made. Over the years Adolfo was uncredited as co-writer of Satanico and it is quite a bummer when you think about it because only his father has ever gotten full credit for it. Even Jorge Barragan got credit for it as well. Adolfo meanwhile, worked on the script just as much as his father did, but got nada over the years.. Why though? Just an error in the credits being made I guess. From my understanding at least. 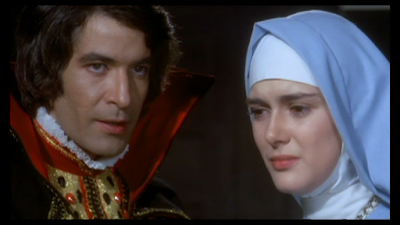 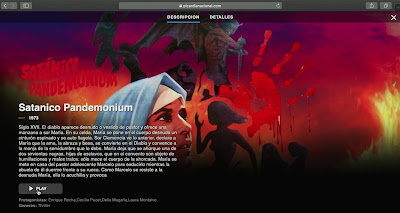 Now in 2020, Adolfo & his heirs run the streaming platform Picardia Nacional which contains many Mexican movies that the Martinez Solares' family have made & own the rights to. Naturally Satanico Pandemonium is on there in HD and... Adolfo & co added a new opening credits sequence! This was originally planned for the Blu-ray, but according to info I had gotten from people behind the scenes, Mondo Macabro wanted to keep the movie in its original form without any alterations, so the new opening credits was never used. The new credits do however appear in the Picardia Nacional version and its not very distracting or cheap looking at all. If anything, it makes the movie feel sorta new in some way. The opening credits is just a dark red background with silver gothic font which contains Adolfo credited along with his father as writers of the movie. Ahh, at last..

Anyway, check out the Blu-ray from Mondo Macabro and be sure to subscribe to Picardia Nacional as well since it's so worth it and affordable as hell.
Labels: adolfo martinez solares, gilberto martinez solares, Mexican Horror, Mexploitation, picardia nacional, satanico Pandemonium
Newer Post Older Post Home