It was A Night To Dismember!

So what did you do last night? As for me, I went to Cinefamily (The Silent Movie Theatre) for Bleeding Skull's screening of "A Night To Dismember", "Don't Panic" and a 6 minute video of Fat Sheriffs from 80's slasher flicks!

Oh man, it was so fucking fun and weird because of The Movies, The Audience, The Trashy Trailers and The Fat Sheriffs. Now let me tell you a little bit of how the movies were and how the audience (including myself, duh) reacted to them. As for the trailers shown, all I remember seeing was Carnival of Blood with Curse Of The Headless Horseman, The Last Slumber Party, Criminally Insane, The Children, some Werewolf movie by David "The Rock" Hudson (I think it was called Son Of The Werewolf), Scream (1981) and uhhh... Yeah that's all I remember, haha. Everyone was going crazy over the Werewolf movie trailer because it was ridiculous and terrible! 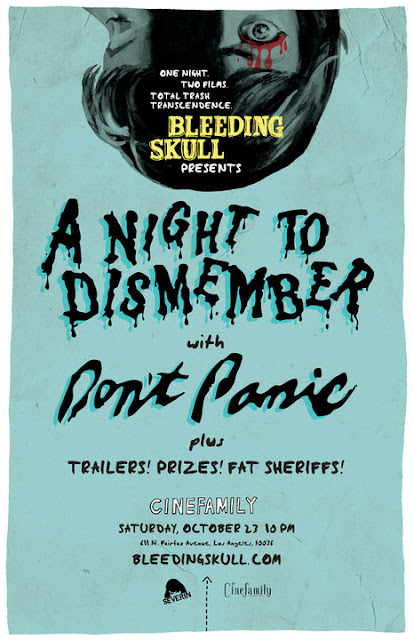 A Night to Dismember (1983)
This movie was a trip, a very weird trip. It doesn't make sense at all, it's like watching a mixtape but a mixtape that tries very hard to tell a story. People were laughing their asses off through out the whole time accept an odd couple making out in front me and that made the movie viewing more weird than it already it was. Full Review Coming Thanksgiving! 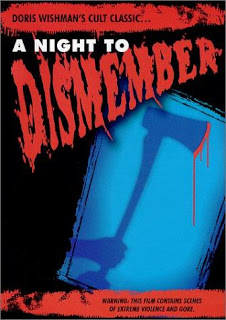 Don't Panic (1987)
Everyone was laughing sooo fucking hard at Michael's Dino Pajamas and also kept laughing at the leading girl "Alex" because of her bad acting and barely visible unibrow.
(CLICK HERE to read my review!) 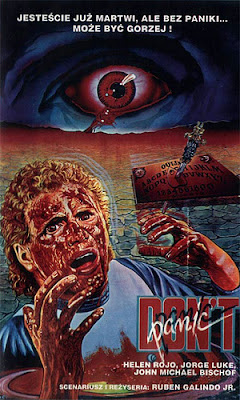