With yet another YouTube channel gone thanks to the illuminati known as "Athos Overseas Ltd" (they have a strong connection to someone who dated Susana Dosamantes, but I will not say who exactly), I was hesitant to upload again and to make another channel, but I decided to go at it again till I get fully tired of it which probably won't happen anytime soon unless I start dating a certain quirky girl that'll take up my time (oof). Anyway, here's 20 trailers I've had sitting on a disc since January. Enjoy! 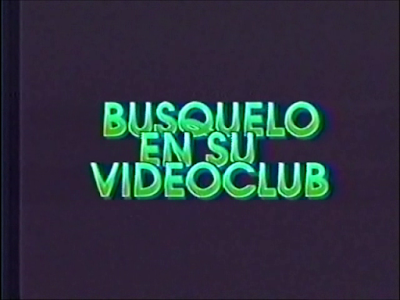 But before we get watching, here's the latest Jorge Gomez movie being announced! I sense a potential Oscar nominated movie here!

and of course I can't forget to announce a sequel to Clave Privada along with a Salvemos El Cine Mexicano promo!

This movie was pretty good if I remember. Been a while since I last saw it though. Brutal opening in the trailer, so beware.

One of the coolest werewolf movies nobody really knows about. Read my review HERE

One of those post-apocalyptic movies with Sergio Goyri and Jorge Luke everyone has seen but me. Cool trailer!

I been wanting to write about this movie for whatever reason, but mainly because Jorge Reynoso is great in it. He also gives flowers to the girl in the movie and asks her to marry him in the end. Isn't that great?

I finally watched this one over the weekend and it was pretty fucking weird but fun. It isn't amazing or anything, but it's entertaining. Rafael Inclan really hates Carmen Salinas in the movie! And Gaston Padilla is in it! GASTON PADILLA!

I uploaded this trailer years ago and it was quite popular. I love the movie by the way. I'll have a set of Miguel Marte movie reviews up soon which includes this one.

I'll pretty much watch anything with Olivia Collins in it. I just hope Edgardo Gazcon doesn't sing in the movie because he sucks at singing. Sorry Edgardo!

The sequel to one of the silliest comedy westerns I've seen yet. This one looks ridiculous, but maybe really fun too.

When I saw this trailer the first time, I immediately remembered my good friend Juan was selling this movie on eBay and immediately bought it from him & picked it up. This movie is really good. I'll have a review of it up very, very soon. I love it!

A Christian Gonzalez movie I don't recall ever know the existence of. Looks hilarious.

Just reviewed this one last month and its a good one. That song alone makes me wanna get drunk, get angry then get sad. Read my review HERE

This movie used to air on Cinelatino all the time and I always watched it. It's so good and one of my favorites starring Rodolfo De Anda and Lorena Herrera.

The finest Mexican horror comedy there ever was... In the 90's. Read my review HERE

I'll bet you $10 this trailer will get reported for copyright, but the entire movie that's been uploaded on YouTube will remain up. Athos & Televisa need to get their shit together!

The ultimate Juan Valentin movie. Honestly. Gabriela Goldsmith is gorgeous in this one as well.

I have this one, but have yet to watch it. I like the cover a lot, too.

For something very low budget looking, this movie looks pretty fun and very interesting. I might have to snatch up a copy of it soon and somehow.

I think this is the 2nd movie about the 1985 earthquake in Mexico. Naturally, very exploitive and intriguing. This one is also illegally uploaded in full on YouTube. How irritating, haha.

I never seen any of the Dinastia De Los Perez movies, but heard good things about the first 2. The millions of other sequels I hear aren't as good.